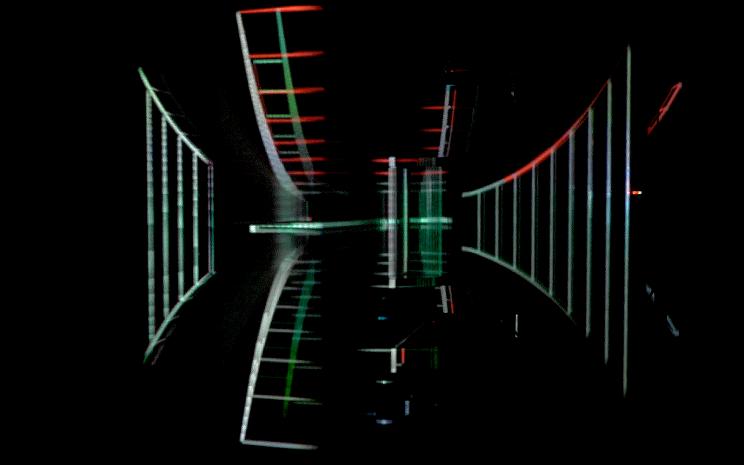 … At times, the object plunges into darkness, while the projection continues to trace its movement, turning the volume into a hologram. The virtual sculpture fans out into geometric forms, bunches into images of a diffused reality. Due to the constant acceleration, it’s no longer possible to perceive the movement in detail, but instead, lines, colors, surfaces, and sounds rush past us.
Over the course of the video, the three levels—object, audio, projection—are sometimes in opposition, sometimes synchronized or reversed; they delete but also determine each other and develop their own multimedia polyrhythm. In the cyclical movement, image and sound conspire and work towards a dizzying and unreal three-dimensionality, a play of visibility and invisibility, actuality and virtuality, visual abstraction and acoustic affect. ROTOЯ confronts the fundamental categories of movement, time, and space and makes references to Paul Virilio’s “raging standstill”; the crystal images of Gilles Deleuze; and psychedelic objects, such as Bryon Gysin’s Dreamachine.
(Shilla Strelka)